Competition. What does it mean to compete? I’d be willing to wager (at least in terms of competition rock climbing) the traditional American understanding of the definition falls short of a true explanation. In classical latin the term is competere, which notably translates to mean: to strive together. It’s this definition which seems to better represent what’s actually happening at major events. Next time you find yourself at a world class climbing event, notice the spirit in which the climbers interact. When pro rock climbers compete it’s not precisely against one another, but rather a shared experience which often involves us mostly competing with ourselves. Can I make that next move? Can I figure this sequence out and match that finish hold? The tone is not of rivalry but rather collaboration. We cheer each other on, share the excitement of success, and empathize with those who’ve made mistakes.

Dark Horse Championship 2014: For those of you out there who still aren’t familiar with the Dark Horse Climbing Series, Championship 2014 is the grand finale of a series of competitions which are held over a period of several months culminating into one final showdown. Those competitors who placed first at each of the previous three events get to enter the finals round at the Championship without having to compete for it. This means in order to win, Mad Rock Pro athletes at this event (as well as all the other competitors from the qualifying round) had to face fresh athletes and compete against them after three grueling hours of qualifying round. 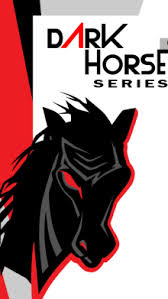 So, I arrived at MetroRock with fellow climber and MR teammate Michael O’Rourke. After checking in and grabbing scorecards we met up with MR pro Rob D’Anastasio. In no time we were looking over the top 5 hardest problems in the red point round. They all looked “doable” but as we would soon find out, some were definitely harder than they looked. Michael had the strongest qualifying score once the tally was in, and in his words he was having “a low gravity day.” Rob D seemed to be having the most effortless time in the qual round and made it into finals at second place with only three falls on his top five scores. As for myself, after an epic send of a crimpy purple taped route and some strategic planning, I knew I’d made it to the finals round. 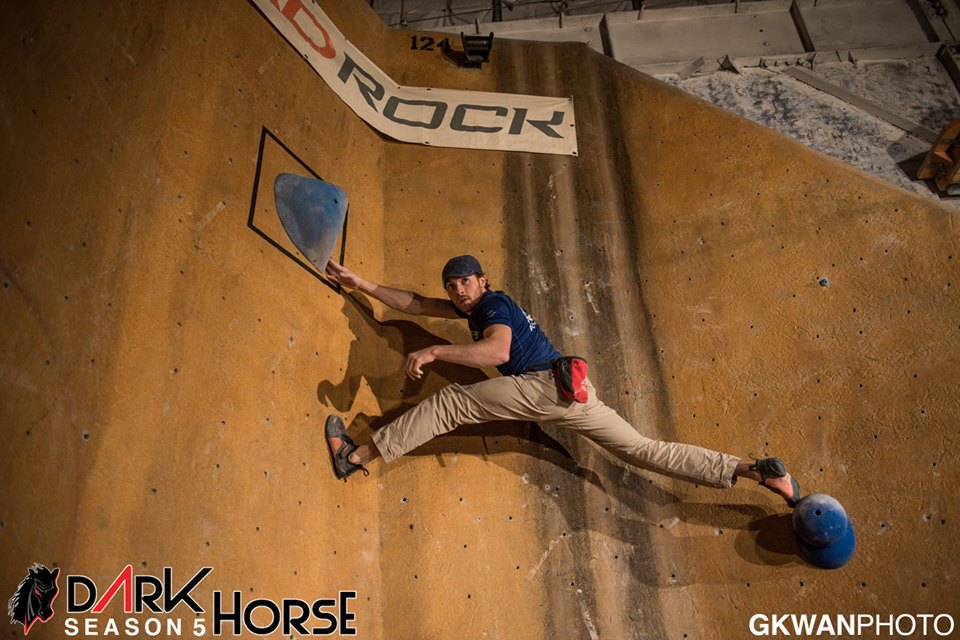 After qualifying I was in serious need of some major refueling so I drove to Cambridge and hit a local organic spot called Life Alive. I drank a killer green juice and ordered a vegan bowl dramatically named “the lover.” Afterward I felt great and would definitely recommend this place to anyone looking to boost their nutrition vibe toward a big comp. For myself, that space of time between the redpoint and the finals round is key. I like to relax, meditate, and fuel up on loads of organic vegetables, protein, and grains. I find this goes a long way in terms of performance. 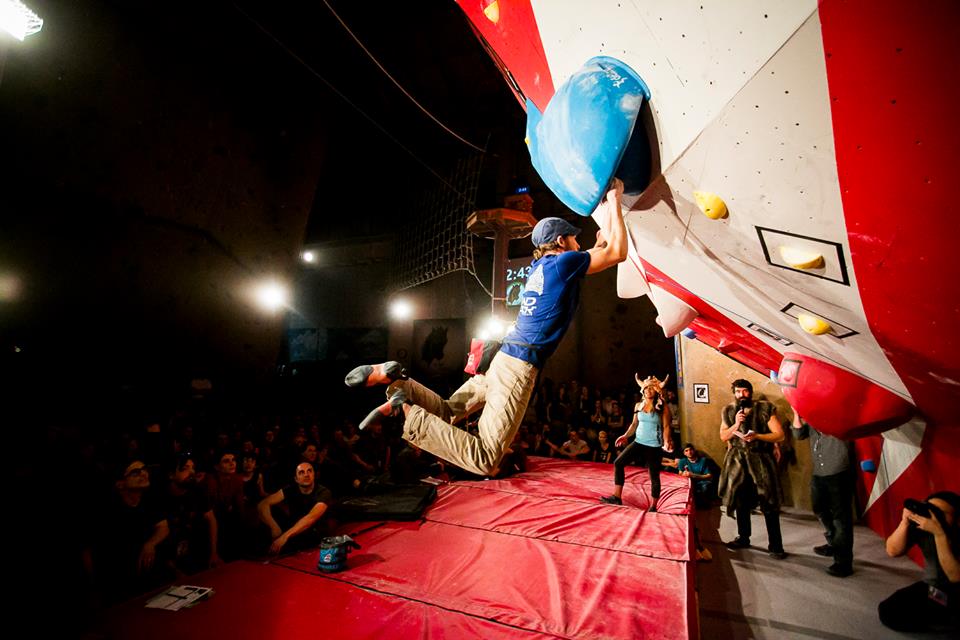 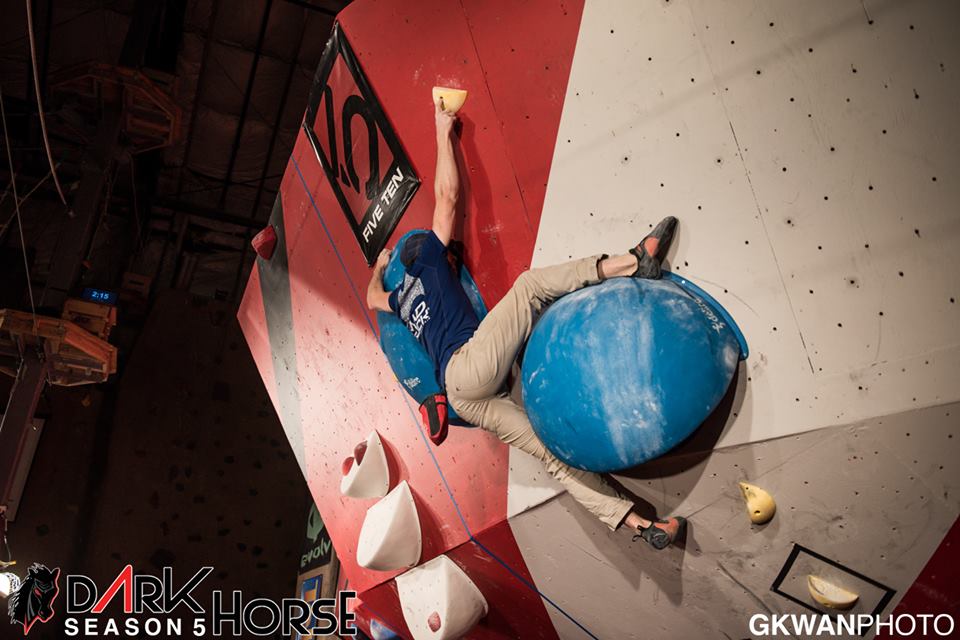 Hours later I met up with other finals round competitors. Though isolation is perhaps a different experience for everyone, I find it a good opportunity to hang out with your friends, share exploits, and get comfortable. I caught up with Rob and Mike again before the big round and found there was plenty of time to warm up and get psyched for what was yet to come.

The Dark Horse finals round consisted of four climbs. Fairly standard, each problem came with a five minute time limit and a five minute rest in between. However, we had no route preview so each problem became a unique puzzle requiring the competitor to unlock the movement the moment time started. The first problem was a balance slash dynamic problem which required a sideways jump on big feet around a low angle arête, followed by a hand foot match mantle to either a stem grab or dyno finish. I completed this first challenge with relative ease on my second go. Rob and Mike also made short work of it. The second problem was a big one handed dyno to an undercling mini jug on the undercarriage of a massive blue feature ball. The trick to this problem was to position yourself in a way that allowed you to through a heel hook on a massive sloper ball and make a huge right hand throw to a yellow sloper crimp. Rob and I were the only two competitors who made it past this move. Mad props to Rob who managed to finish the problem even though he matched the finish jug after his 5 mins were up. The third problem looked straight forward enough but ended up being quite the balance move. I was able to bypass the first double clutch pinch move by smearing my feet on the left corner wall. This allowed me to get to the upper holds without exerting as much energy as any of the other competitors. The last move was a delicate right hand foot match while balancing on a screw in jib for the left foot and crimping the slickest, greasiest sloper crimp with a left hand. The finish was a delicate right hand thumb-der-cling and a left hand nothing hold while perched on a decent foot. This was the only other problem Rob and I topped and Mike came seriously close to pulling this one off as well. The fourth and final problem was a crowd pleaser, big moves, good footholds and classic feature wrestling using intensive compression moves to gain a good stance, then a huge dyno to a big pinch rail at the top of the wall. Michael O’Rourke got to the highpoint on this problem and was almost able to pull off the last dyno move. 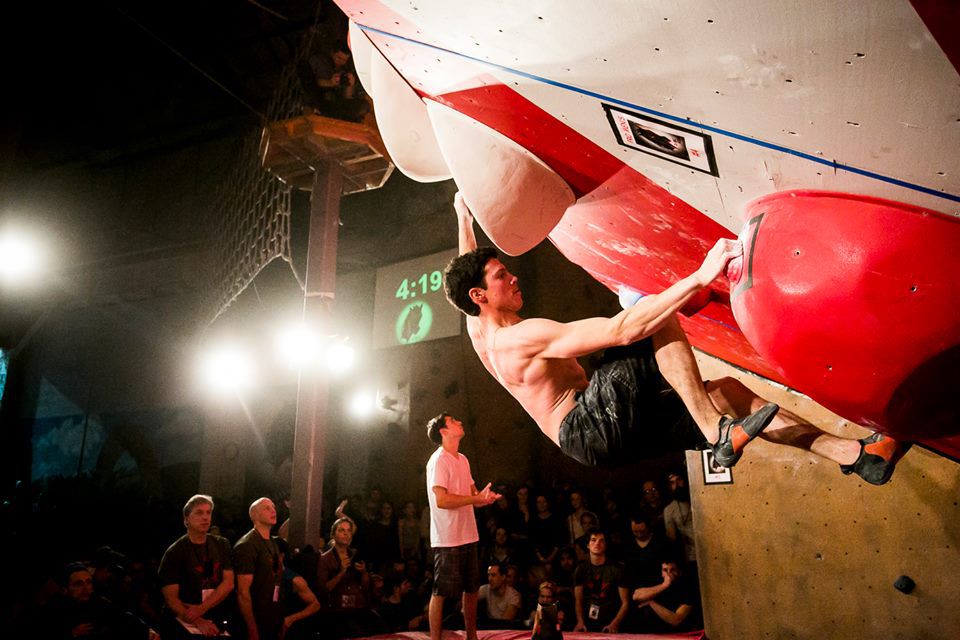 Overall, I thought the problems were fun to climb and well set. The finals round was close but the field was successfully separated by the setting. Mad Rock athlete Rob D’Anastasio took first place, while I came in a close second, and Michael O’Rourke took fifth. Props to all the Mad Rock athletes who competed in this major event, including the little crusher Kayla Pelletier who took a third place finish in women’s youth juniors. Overall, I think it’s safe to say Mad Rock athletes took the horse by the reins at this years Dark Horse Championship. Stay tuned and watch us climb at this years ABS Nationals, hope to see you there!