While the video I made of climbing in Thailand was a good representation of the trip, I’d like to share a bit more about my experience.

First, deep water soloing (DWS) in Thailand is two parts adventure, one part climbing. DWS in Mallorca (Spain), in contrast, is two parts climbing, one part adventure.  To me, that’s part of the attraction of traveling halfway around the world to SE Asia and a cliff less traveled. After ~30 hrs of travel, we arrived on the Phuket peninsula in southern Thailand. Most climbers stay on the opposite side of the bay (Phuket sea), near Krabi and Railay Beach, and while we did not, I would recommend doing so.

While there is a decent online guide that a few climbers have put together, its real benefit was guiding us to locations of high quality rock. With thousand of island rock spires jut out of the water, the guide is useful for directing you to the best ones. When arranging travel around the bay to the different climbing areas, we quickly learned that destinations would be reached and things would be accomplished in ‘Thai time”, which is roughly 2-3 times longer than would be stated. That’s fine. Just takes some getting used to!

Our experience was mostly exploratory.  We would spot an inspiring line and climb it. Well, more accurately; see an inspiring line, attempt to communicate with the boat captain, slowly navigate close to the cliff, find a way on, start climbing, freak out that the boat is still directly underneath you, yell at the captain, wait for the boat to move out to sea while getting pumped and then attempt to climb. Grades were irrelevant, but that’s not to say difficulty wasn’t sought out. 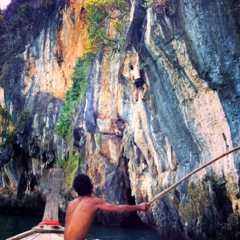 There were two locations in the Phuket sea that were some of the more difficult areas to reach, but well worth the effort. The first area, Koh Yao Noi (Koh meaning island), is accessible via an hour ferry ride to the island and then a 15 minute long-tail boat ride to the island-spire just to the north. Unlike the DWS I’ve done in Mallorca, the DWS in Thailand requires a boat or kayak to reach. A long-tailed boat or speed-boat can be hired easily, albeit not as cheaply as we had hoped. I would recommend traveling in a group, or meeting other climbers to keep the costs down, as renting a bout is done by the hour, not the number of people.

Koh Phi Phi, the second area, while the most challenging to get to, has hands down, the most potential of any area we visited during our stay. Unbelievably high quality rock. Ridiculously stellar lines. Unbelievable. The whole area was like a backdrop from a movie. The rock offered desirable features for us to climb, complete with tufas, pockets, and crimps.  There were several tufa lines that went on for miles of climbing bliss. At times, the climbing was so good it was easy to forget the golden rule of DWS: The higher you go, the farther you fall.