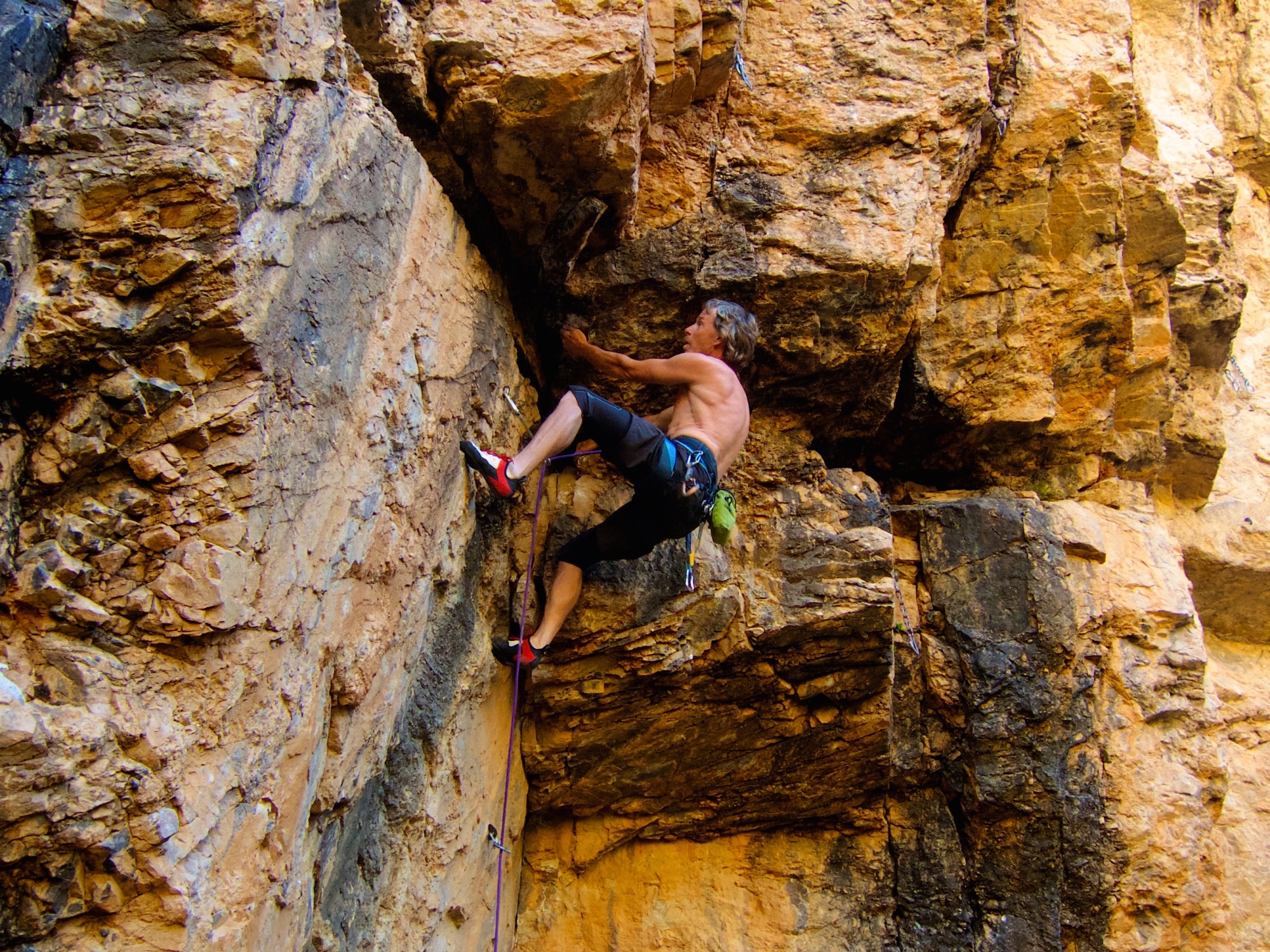 We had no idea in the office – he’s not part of the generation that now puts everything (what he eats for breakfast, how funny his hair looks) on Facebook, Insta/SnapChat/Twitter in the time it takes to dial a your parent’s landline with real push-buttons.

But we knew he was one of the first to develop El Salto’s routes in Mexico.
So when he asked for bolts to develop a new area, we got curious.

Jay Foley
Into the Lion’s Den

After getting a degree in mass media communications, I spent a few years in television, as well as FM radio programming.

Other than maintaining some part time work in the film industry, I have now pretty much devoted my adult life to climbing.

But I am only just learning how to project routes.

After years of refining trad and guide techniques I am only now, as an old guy, learning how to refine my sport climbing skills.

I began as a trad climber and moved into professional guiding and although I would occasionally climb routes that were at an easy red point limit I had never really learned to push beyond this into the “project” level. Going from 13a to 13c seemed unfamiliar and impossible.

That all changed recently with the motivation from a friend and the discovery of a steep shady granite wall less than 20 miles from my front door.

This new area is named the Lion’s Den.

It’s named after evidence of mountain lions on the approach trail, has become the best 5.13 crag in Taos, New Mexico.

With no access to the top of the wall, and the overall steepness of the routes, it took me a season just to get some routes bolted.

There are now over twenty completed routes, almost half of them between 13a and 13d.

I had already completed a few 13a/b routes when my friend Matt Samet came down from Boulder, Colorado to check out the Lion’s Den.

When Matt showed up, I was bolting a new route that I was about to bail on, and told him “This one is too hard for me, you should take it”.

“How many days have you put into it?” he asked.

“I have mostly been trying to bolt it, and just spent a day working on the moves, but it’s too hard for me,” I replied.

Matt, who has decades of experience projecting hard routes, said “You should give yourself seven days before giving up.” I thought he was just being nice, but much to my surprise, after only a couple days of effort, I was linking some crux moves that I had previously thought beyond my ability. I was ecstatic! I invited Matt to help work the route with me. He happily accepted and also donated some hardware and time to add the remaining bolts to the route.

I was already fifty years OLD, and thought I was beyond improvement. But I sent the route, one of my hardest to date!

Matt gave me the psych to stick with it and send, and having this new crag close to home will continue to motivate me.

I suggested we name the route Flyn’ Lion in memory of Flyn’ Brain McCray who passed on while we were working on the climb. Brian was not only a friend, but also an older climber and I believe one of the best all around climbers having completed both 5.14 and A5+ first ascents in his lifetime.

Flyn’ Lyon at 13c/d turned out to be super fun. The movement is dynamic and pleasant with good rests and intricate crux sequences. It overhangs over forty feet during its ninety-foot length.

And the Lion’s Den still has more routes to offer.

I have my eye on 100’ tall 35-degree overhanging line for next season. I think my buddy, and fellow Mad Rock Family athlete, Timmy Fairfield, has his eye on some horizontal terrain on the right side of the wall too!

Route info and directions to this north facing steep granite wall will be included in my second edition of Taos Rock, due out this summer.

A big up thanks to Mad Rock Climbing for all of the rubber and stainless steel hanger support in the development of this stellar new crag, and thanks to Matt and Brian for the psych!