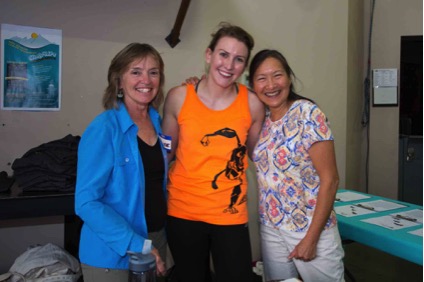 A couple weekends ago, I had the opportunity through Mad Rock to attend and speak at the HERA Foundation’s Climb4Life event in Salt Lake City. I was very honored to be a part of this event, as I’ve attended one before in Boulder, and even more honored to be able to share my mental toughness clinic with all the attendees. I can’t thank Nickie Kelly, John Evans, Mad Rock, and everyone else who supported the event for the invitation and experience.

Arriving in town Friday evening, Photographer John Evans kindly invited me to stay at his house with his wonderful family. John is someone I have known for quite a bit, meeting through our mutual friend, Pamela Shanti Pack. He knows my climbing style, strengths, and goals in climbing better than most. We’ve done photo shoots on some scary, unknown climbs, and we work very well together. After a night of catching up, I prepared for my Mental Toughness Clinic early the next morning. Over coffee and omelets, I discussed with John and his wife, Rose, what the day would entail. Since my clinic did not start until later, I decided I would practice a few times before getting to Momentum to present.

I have done these clinics several times in LA with Mad Rock, showing up at gyms and presenting to fellow climbers some of my tips for the mental aspect of climbing. But this time, I was not sure exactly what kind of audience I would have. I had no clue the size, climbing experience, or demographic of the audience. I wanted to be prepared for anything in order to adapt to the environment. So, I decided to make things a little more interactive, relatable, with optional exercises depending on how much they had climbed in the previous clinics of the day.

I arrived at Momentum Sandy in the afternoon, and it was humbling to officially meet all the wonderful ladies that helped organize the event. I set up for my clinic and before I knew it was time to start. After beginning my usual spiel, people began chiming in and asking questions. It was awesome – it was like this relatively small group discussion of how to be mentally tough. I’ve never before had a group where it felt so natural and comfortable to chat with them. The interactive parts where they had to write things down were welcomed, and people took notes throughout as they nodded along and listened intently. As I suspected, people were exhausted from climbing all day at other clinics, so we did not do climbing exercises. However, we did chat for over an hour about my techniques and how they could be applied to everything – from everyday life stressors to intense life threatening situations.

I’ve never had an audience before that I felt so connected to. Everyone was so grateful for my advice and techniques, and I also felt so grateful for the psych that flowed through our whole group. As I said before, I have done similar clinics to this many times before, but these past clinics were back in June. I simply forgot how rejuvenating it is to connect with people and watch the lightbulbs go off in their brains. When they grasp what I am saying and see it as something helpful to reaching their own goals – that is exactly what I love about doing these clinics. They help me as much as they help the people I am presenting to.

After the clinic, I was able to enjoy some of the other fun aspects of the event, including the raffle climbs. I was able to onsight the harder raffle climb, and I gave the ticket I won to one of the other girls participating in the event. I even got to read out the winners at the end of the day, and watch as a young boy won his first climbing rope.

After the event was finished at Momentum, we all headed over to the Petzl headquarters for a dinner sponsored by Taqueria 27. This dinner also included one of my favorite parts of the day – the silent auction. The silent auction at HERA events is always filled with amazing climbing related prizes, donated from various companies. Mad Rock donated a beautiful, one of a kind, HERA Foundation Crash Pad. And Adidas Outdoor kindly donated several jacket pieces.

I saw the same boy who won the rope earlier eyeing the Mad Rock pad. He was discussing with his parents about whether or not to bid on it. I walked over and showed him the inside, which had the HERA Founation logo on it. I also showed him how to set it up as a couch for when you are resting. He was immediately hooked and loved it. He ended up winning that pad, and it became his first ever crash pad! It reminded me of my first crash pad – which also happened to be Mad Rock.

During dinner, we watched as a couple women presented about their experience with Ovarian Cancer. Both had been diagnosed as having not much time left to live, but had far surpassed the expectations of their doctors. They had beaten the odds, which when it comes to Ovarian Cancer, are generally not good. I think what stuck out to me most was when one of the women stated that she went through 18 months of chemo, which made everyone in the room gasp. 18 months? Totally insane. And she also made it a point that there was no secret to her success, she simply was lucky to be where she is now, and grateful to her husband for standing by her side. The tears in my eyes were starting to stream down my face as I listened intently and felt for these incredibly strong women.

I think what makes this event so special, so incredible, is that it has such a meaningful purpose backed by some of the strongest people I have ever met. The event staff was thrilled to have me attend and give my clinic, but I think I was more thrilled to be able to meet the staff, presenters, and attendees that made this so special. It reminds us all that we are not invincible and we are not superheroes individually. However, when we all come together to support something great, we have power in our union that leaves us all stronger from that day forward. Before HERA, I did not know a single thing about Ovarian Cancer. But now, I am well informed and well equipped to help spread the word. My life is about climbing, but my purpose is not simply to climb. It is to be the best person I can and help the world through any means possible. Everything this event gave me – from the psych I gained through presenting my clinic to the tears I shed from the stories I learned – helped me to develop and refine this purpose. I will be wearing a bit more teal in my wardrobe from now on.